Hansel and Gretel is a widely popular fairy tale about two kids, their incompetent parents and a witch in the woods. It inspired numerous artistic works and Engelbert Humperdinck's opera is just one of them. The libretto of the opera was written by Adelheid Wette. The opera was popular enough to be published with libretto and musical notes in different languages on several occasions. This post deals with a book for kids where libretto is rewritten in prose and richly illustrated with pictures signed by Maria Louise Kirk.

Maria Louise Kirk (1860-1938) was a very prolific illustrator who is almost forgotten now. Yet she illustrated numerous classics like Pinocchio, Heidi, The Story of Hiawatha, At the Back of the North Wind, ... While she was never particularly favored by the critics, the audience always well accepted her works. It's only fair to present her pictures through blogs and other similar media, so we'll never forget such a talented artist.

The Humperdinck's Hansel and Gretel roughly follows the basic plot of this classic fairy tale, but it's also adapted to the media, where music and movement play so important role. There are also several not so radical, yet still important changes in the story, which will be discussed a bit later. For now, let's summarize the Hansel and Gretel as Adelheid Wette presented it and accompany it with lovely pictures by M. L. Kirk:

Hansel and Gretel were home alone. Hansel had to make brooms and Gretel knit stockings. After a while, Hansel proposed to dance rather than work. 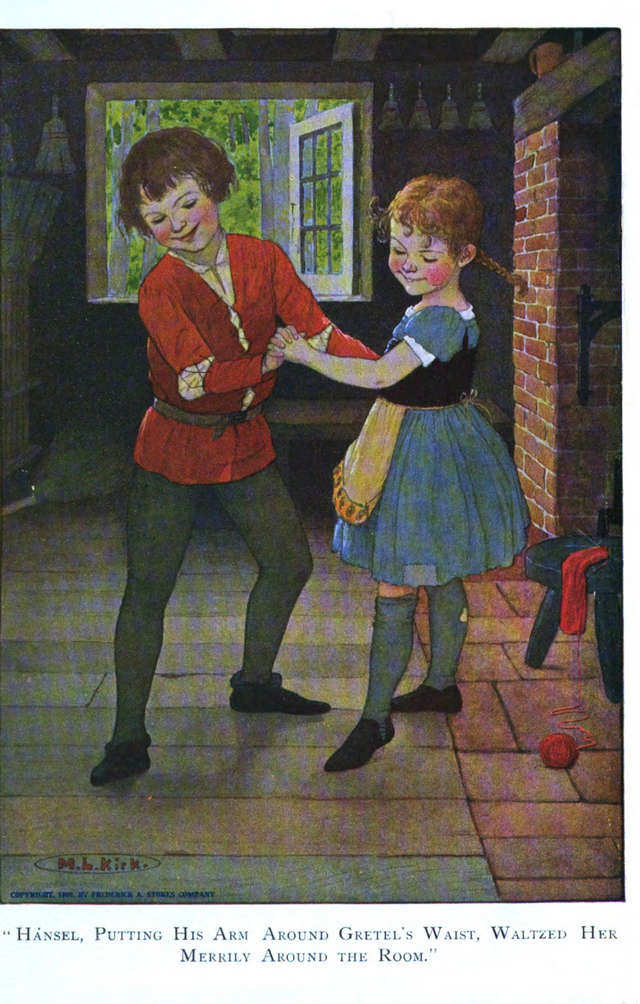 When their mother returned home she was very disappointed and angry. She accidentally overturns the container with milk. It looks they lost everything they had for dinner! so she sends the kids in the wood to berry some strawberries. 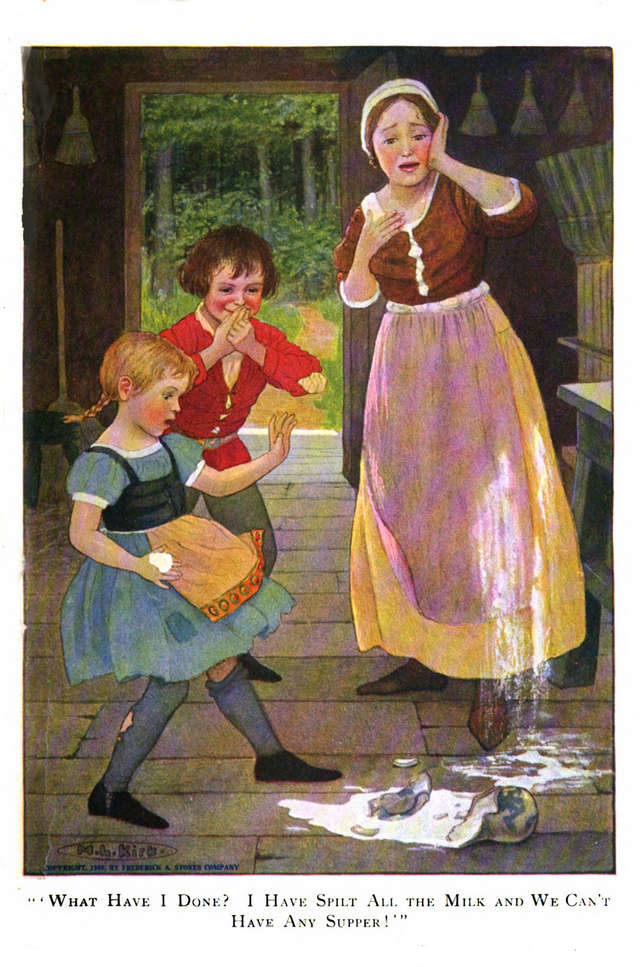 When the children left the house their father returns. He was very happy. He sold all the brooms and got good money for them. Then he asks where are the children and is horrified when his wife told him they left to the part of the forest where the witches had been seen. 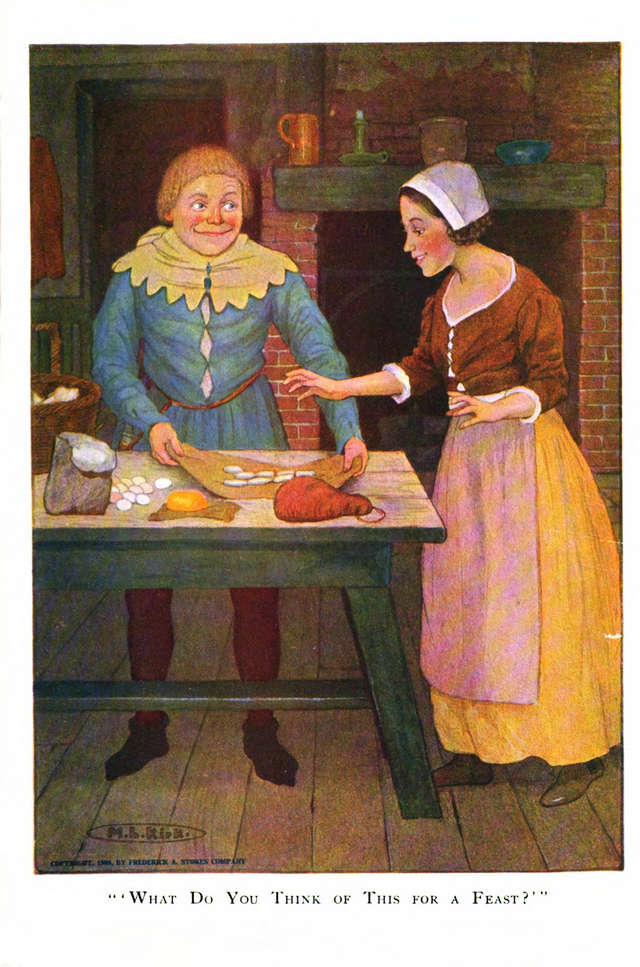 Hansel and Gretel were still carefree. He is picking the berries, she is making a wreath of flowers. They are hungry and eat a few berries. One by one they ate them all. They remember they should return home with a full basket but it's getting dark. 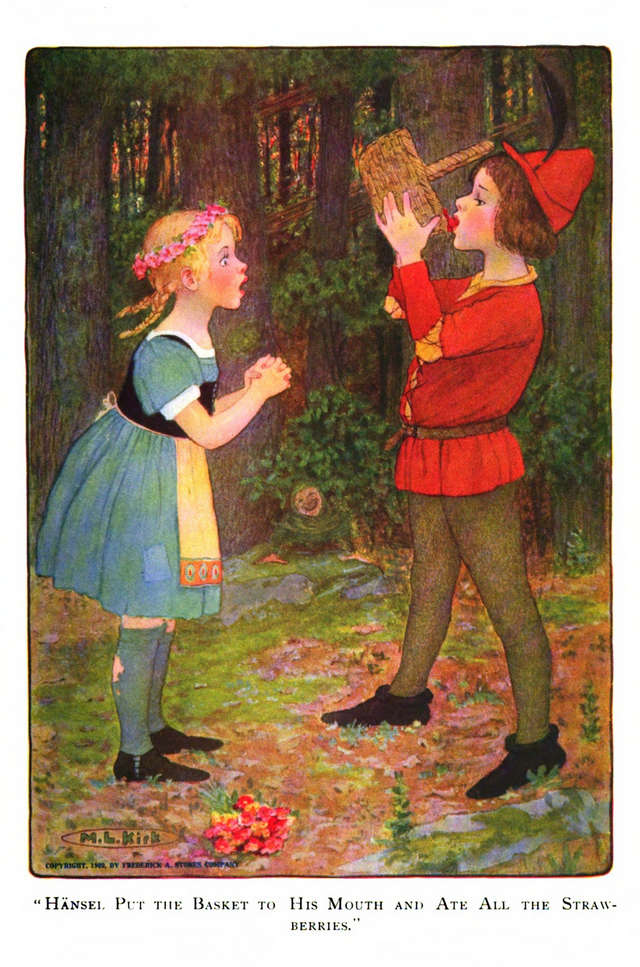 They become frightened. Hansel tries to console his sister but soon he becomes afraid of the shadows as well. 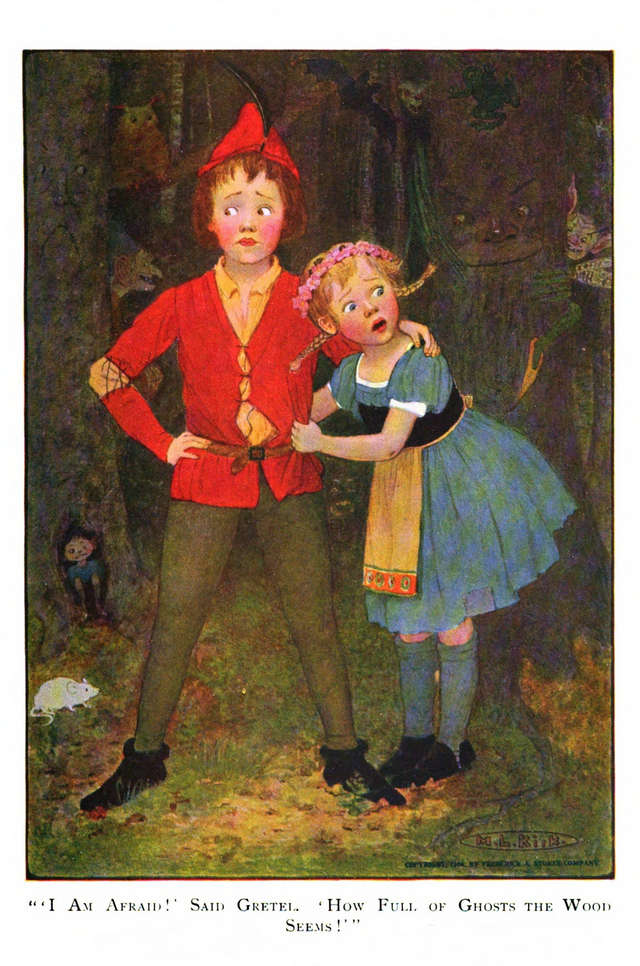 When the night falls, they fall to sleep hugging each other. Angels pass by sleeping children and nothing bad happens. 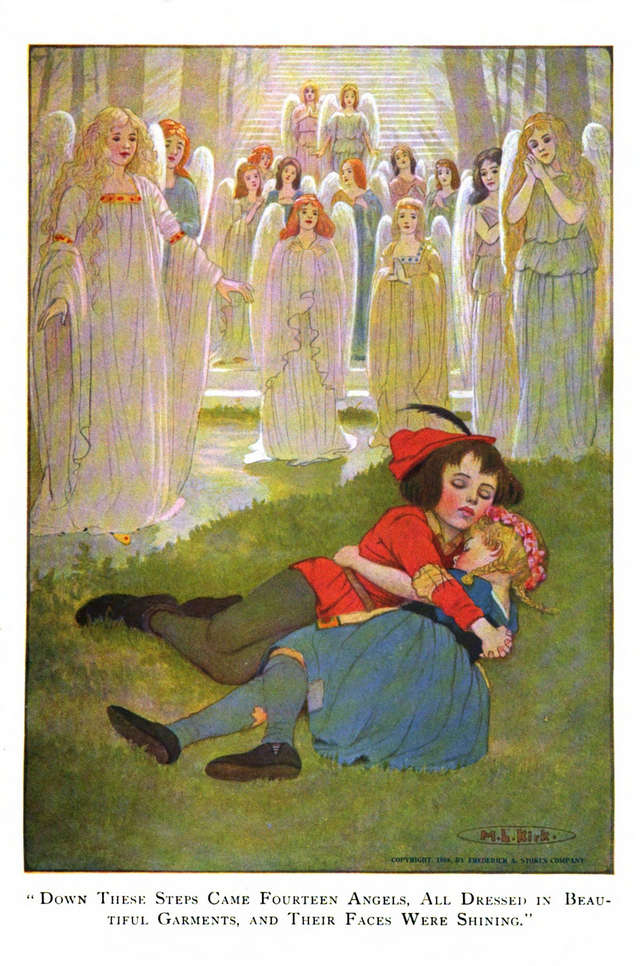 Hansel and Gretel woke up in the morning. A fairy sprinkled them with dew. They are still sleepy. They are hungry too. There is a house nearby. It looks it's made of gingerbread. 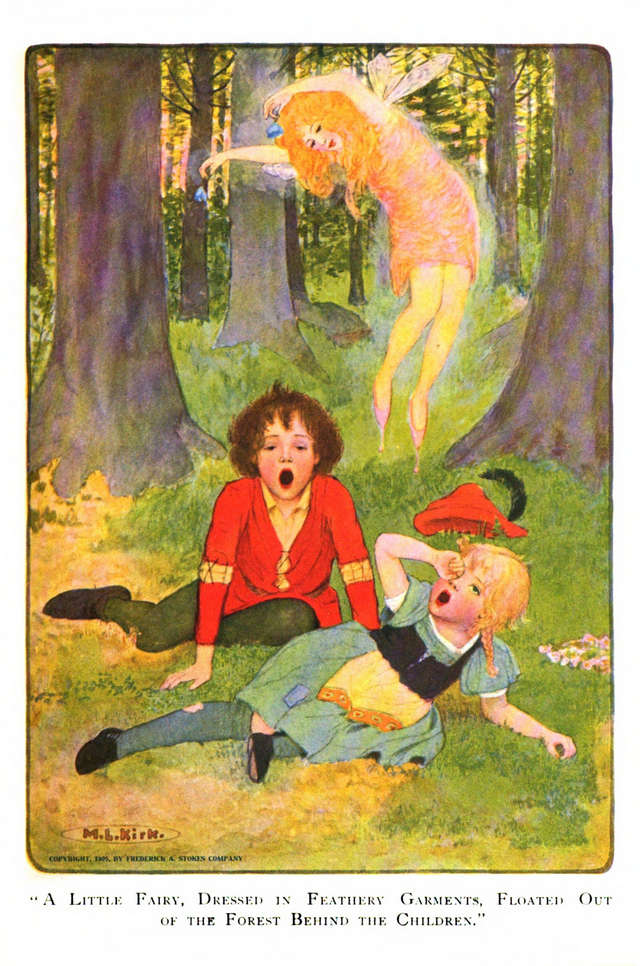 Kids eat some ginger cake and the witch invites them to eat some more. When the mood of the kids improves, the witch comes out of the house. She grabs Hansel and with a help of the spell take both as prisoners. Then she prepares an oven and orders Gretel to look in. The kids push the witch in the oven. 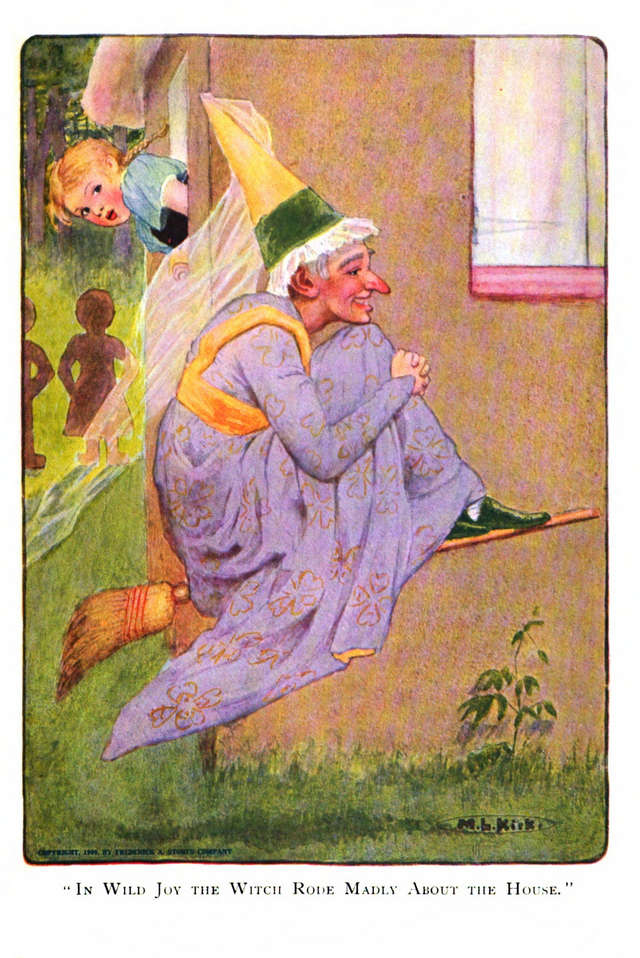 Kids celebrate their freedom, the oven explodes and more kids appear around Hansel and Gretel. They were all changed into gingerbread figures. When all the kids dance happily the father and mother of Hansel and Gretel appear. Everybody is happy. 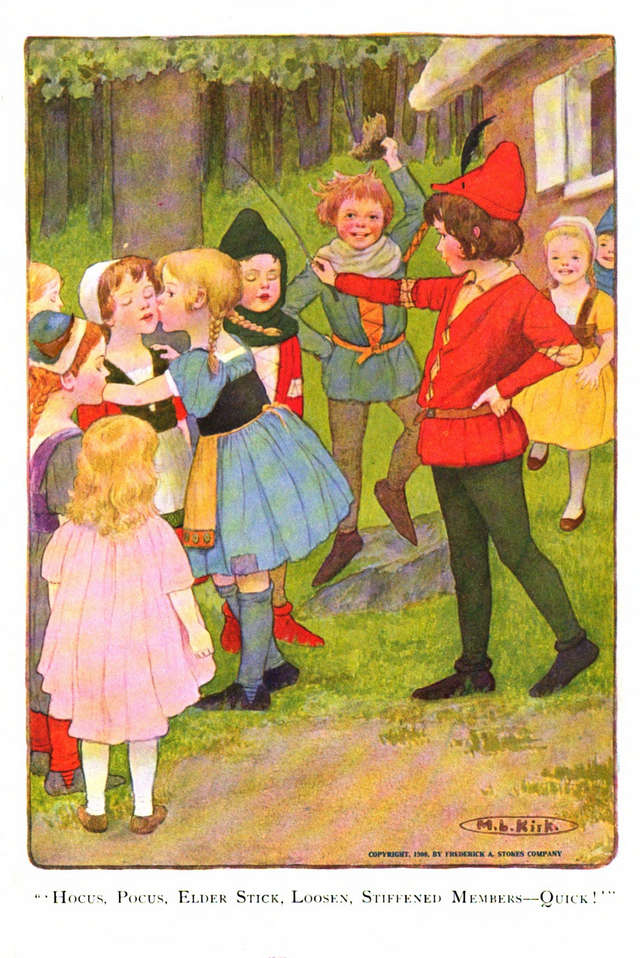 What are the main differences between 'classic' (written by Grimm brothers) and 'opera' (written by Adelheid Wette) Hansel and Gretel? If you want a detailed analysis of the story with summary, interpretations, symbolism and historical development, it's probably best to start here:

But we'll try to expose only the crucial points:

We could go on and on with the minor differences but the main ones are probably here. If you think there is anything more to add, please write a comment!

« Old Time Stories, illustrated by Willia… A frog he would a wooing go by Henry Lo… »
Profile