The Six Wives of Bluebeard

Can you name all Bluebeard's wives? Do you know at least who was his last one? 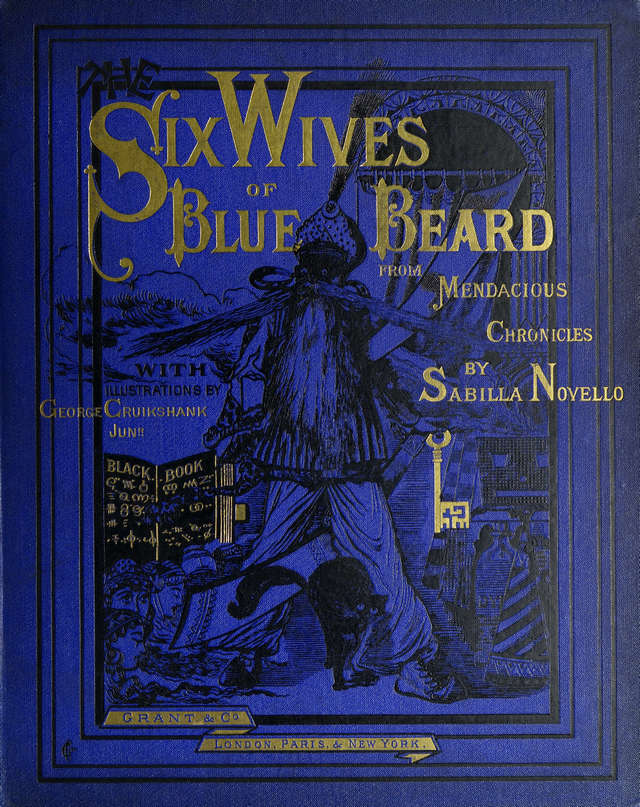 Or maybe not. By many the best story about the wives of notorious serial killer called Bluebeard is written by Anatole France. According to this, his wives were:

Anatole France's story presents his wives in a bit different light than people only familiar with a fairy tale may be aware of.

In the fairy tale, they are indisputable victims but when we are informed by their previous positions in their lives and relationships with Bluebeard, things definitely look different.

There are also several stories with six or eight wives of Bluebeard altogether. 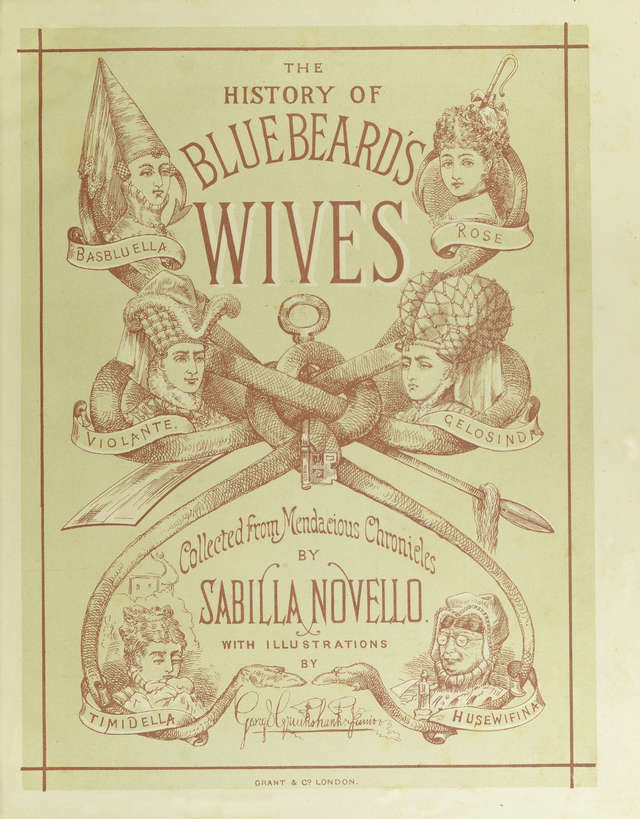 For this occasion, we'll focus on the less known book by Sabilla Novello. It's titled Six Wives of Blue Beard from Mendacious Chronicles. It is written by Sabilla Novello and dedicated to her nieces Porzia and Valeria dei Conti Gigliucci.

Not much is known about Sabilla Novello and the situation with illustrator is very similar. He is signed as George Cruikshank Junior what gives us an impression he is a son of a very successful George Cruikshank who was still alive in the time of the publishing of this title. Thanks to the fact George really signed himself as Jr. on several occasions there's also an opportunity he authored the illustrations. Maybe he just helped at designing the cover, adding his monogram in the left down corner. 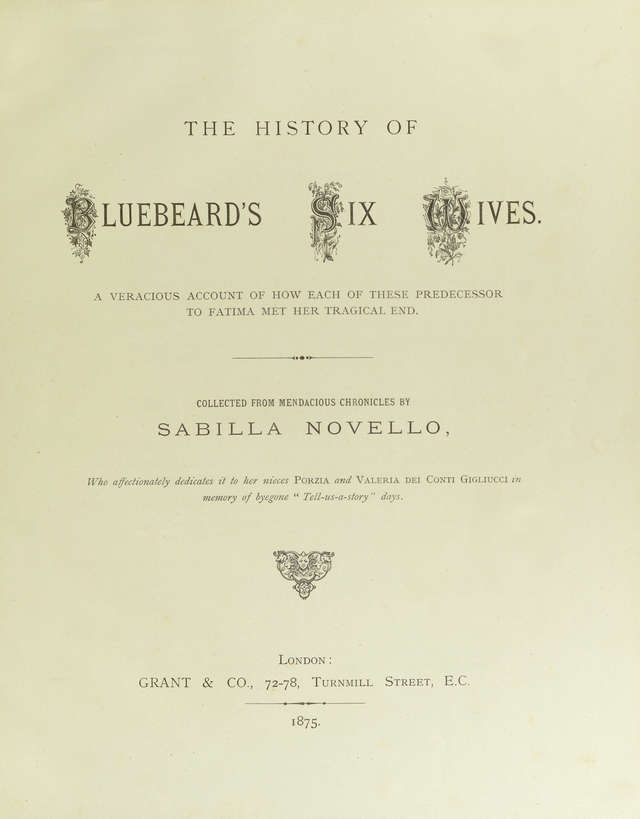 We can rely only on the fact he was not active after 1884. We also know he was born in 1842 what means he should live way over one hundred years (to die after 1949) to keep the copyright of presented pictures out of Public Domain what is very unlikely. So we'll present them anyway. Each picture carries a story and they are presented as well. 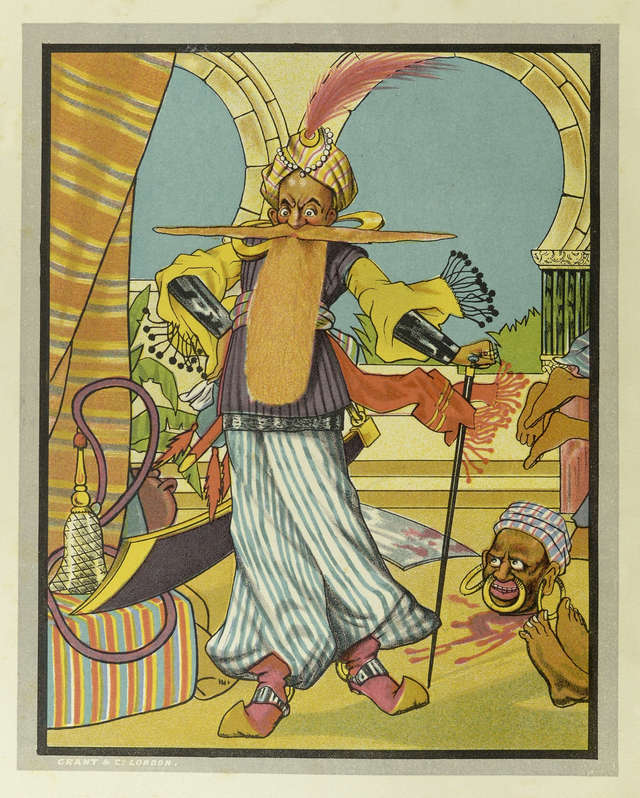 Bluebeard while his beard was not blue yet

Pompernicus Gynicide was a nobleman. He was brave and elegant and almost ready to be married. Apart from having a temper and occasionally impulsively killed a few servants, he looked like a very good catch.

His godfather Estrellus who was skilled in black magic suggested to Pompernicus' mother making a horoscope to find a perfect match. Soon he realized there's something strange with the fate of the young man. No matter how he calculated, there was a warning - Pompernicus will be in very great danger because of the curiosity of his wife.

Estrellus believed and Lady Gynicide agreed. The only option to prevent the tragic consequences of the marriage would be marrying Pompernicus with Estrellus' daughter Basbluella. 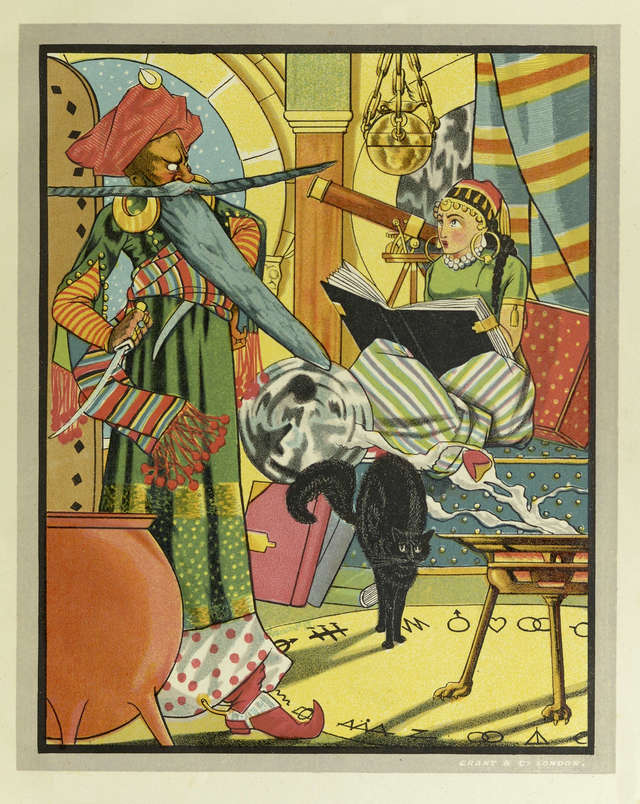 BASBLUELLA: "I throw the Blue 1n thy Beard!"

Young Baron Gynicide and Basbluella married yet soon realized their characters don't truly match. She was all about books and he was all about tournaments and combats. Once when he insisted she should join his company at hunting she was just practicing black magic and more or less incidentally changed the color of his splendid beard into blue.

Blue beard became an object of ridicule among his friends and later Pompernicus angrily cut her throat. He told Basbluella's father she died in an accident practicing her dark skills and he believed. Her body was embalmed and put in one of the chambers in the tower. Pompernicus became very depressed and soon stayed almost without friends. 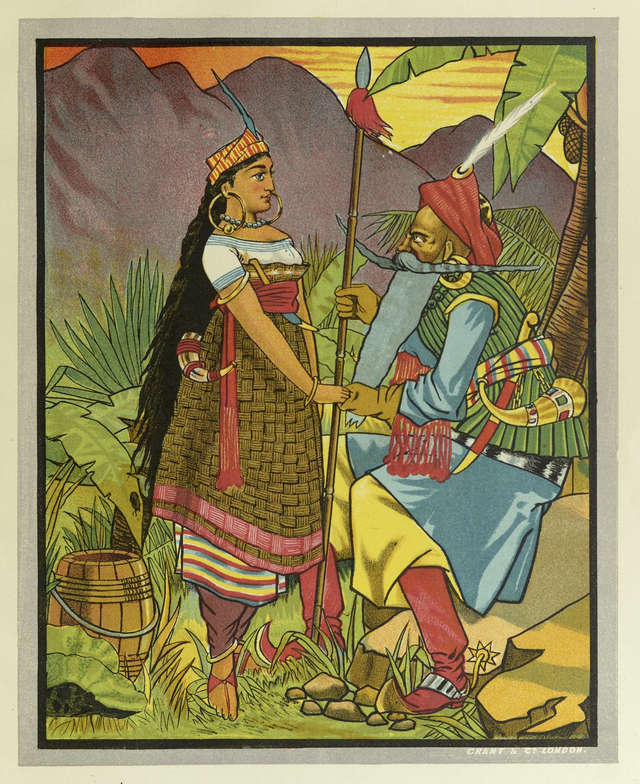 He sought out ROSE, and asked her if she would like to be married

As a widower Pompernicus more and more evaded company. He referred wandering around the forests and mountains. One day he met a shepherd and they liked each other. Shepherd introduced him to his granddaughter Rose who saw only a couple of old men and wasn't shocked by the strange color of Pompernicus's beard. She even told him they had a habit of naming people after particular characteristics. Just like she was called Merry-voice, he should become Bluebeard.

Soon he realized the naive girl could be a good wife, especially after his too educated first wife. After a few minor comical complications, she married him and became a lady of the house. There each of her whims was readily served with one exception. she was forbidden to enter the tower where Bluebeard and his ex-father-in-law practiced rituals in an attempt to restore the color of his beard to normal.

But she could not resist. One day, when her grandfather visited the castle and she felt particularly self-confident, she led him right to the tower. Believing her husband won't punish her she entered the forbidden room when Bluebeard and Estrellus were in and her husband cut off her head. When her grandfather started cursing him, he stabbed him in the heart.

Now two dead wives lied in the chamber. Bluebeard started heavily drinking and gambling, with numerous bursts of his temper. After a while, his godfather realized he'll die soon and told him he should still beware of his wife's curiosity. He had two options - to not marry or to test his next wife's curiosity. For this test, he gave him a key to the forbidden chamber with his wives' remains. The key was transformed with magic - if anybody but Bluebeard opens it, it will change its color.

He also tried to add he should, by all means, avoid a woman named Fati... but died before he told the name. 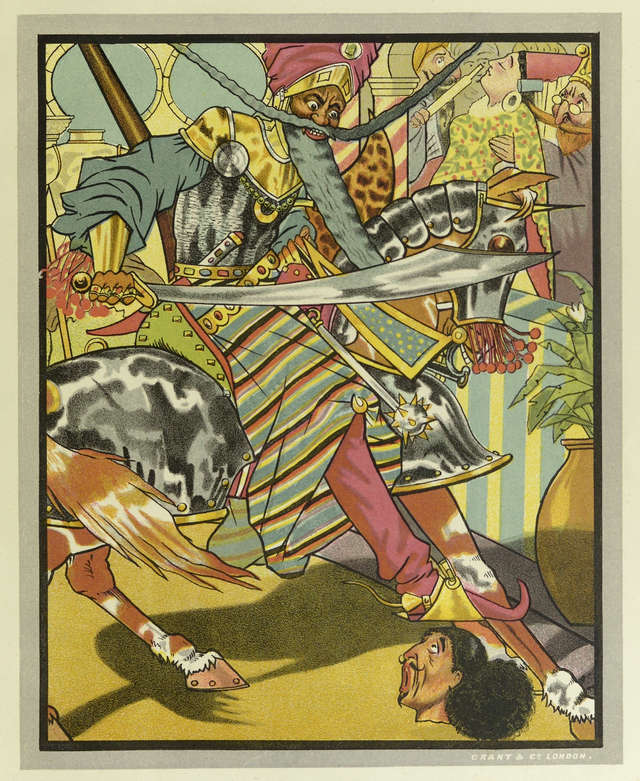 He struck off the Head so dear to VIOLANTE

After the death of his second wife and his godfather, Bluebeard focused on hunting for some time. Then he heard about a tournament with an interesting price: the winner will get a princess Violante for his wife. Bluebeard started well, winning the first day and remained hidden under his helmet. At the end of the day, he even refused to take the trophy saying he came to win all. That charmed the king but not the princess who was obviously interested in a handsome knight named Gaetano.

When Bluebeard won the second day, he was very tired and a bit wounded. When he was resting a damsel visited him with a warning. Her name was Gelosinda and she heard her princess plotting with Gaetano and a doctor about poisoning Pompernicus Gynicide. He thanked her and in the morning tricked the doctor who believed he drank the potion while he threw it away. Then he won the last day of the tournament. For the grand finale, he decapitated Sir Gaetano.

The wedding party was a disaster with the bride crying in her rooms, without any dancers, and king and Bluebeard being only ones eating. After a few days, Bluebeard took his third wife with some of her damsels (Gelosinda included) to his castle. There he warned her not to enter the tower with dead bodies of his first two wives. He also balsamed the head of Gaetano and continued spending a lot of time hunting.

Step by step Galesinda convinced princess Violante she should enter the tower at least to say farewell to the head of her dead lover. When she did that, she found both death wives but Bluebeard caught her and cut her head with his scimitar as well. 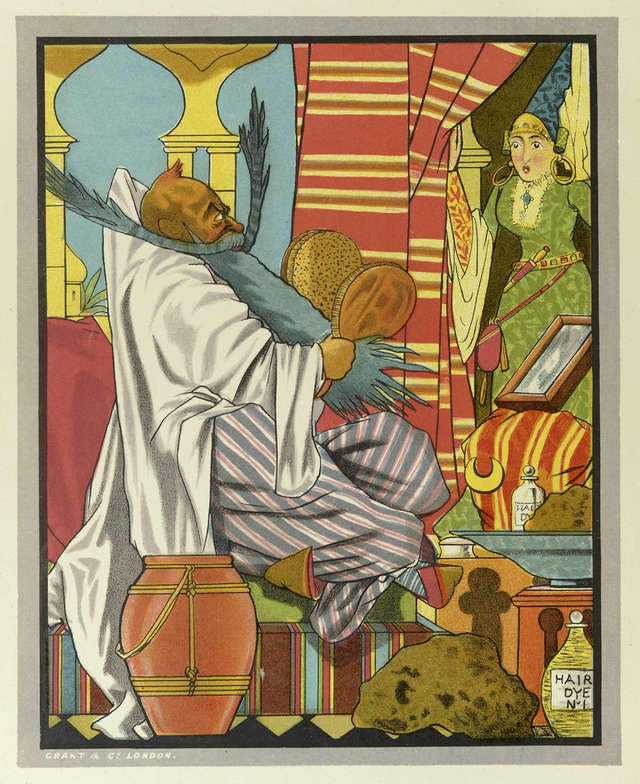 Bluebeard sent a coffin (keeping the body for himself) and a message to Violante's father. He made up a convincing story about princess death and everybody believed. All her damsels with an exception of Gelosinda who pretended illness left the castle. Her plan was simple and effective. She wanted to become the next wife of Pompernicus Gynicide. So she did. But she was very jealous. His constant hunting and secret businesses in the forbidden tower drove her mad. She believed he has a mistress there. His numerous nightmares

One night she followed her husband in the tower where she discovered the dark secret - dead bodies of previous wives. She begged for mercy but Bluebeard stayed true to his promise. He cut her throat and balsamed her remains. 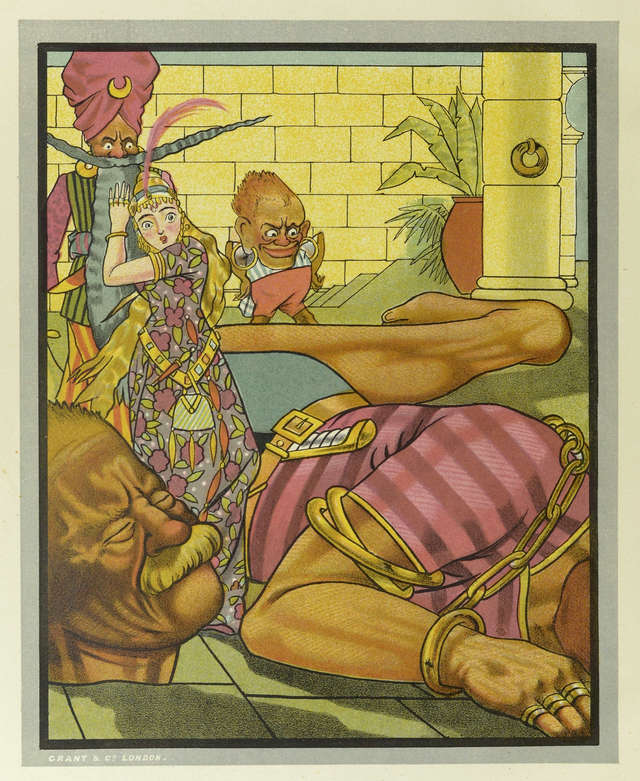 Pompernicus Gynicide aka Bluebeard remained single for some time, spending his days mostly hunting and looking for adventures. One day a dwarf met him and told him about a giant who kidnapped a princess Timidella. He locked her in a tower waiting to gain some fat so he could eat her.

Bluebeard challenged the giant. Timidella's striking beauty distracted him so much the giant managed to wound him. However, with some help from the dwarf and Timidella, Bluebeard cut the giant's head off. He went to Timidella's father where a great party took place. Timidella who had a very panicky character started showing romantic interest yet her father didn't like Bluebeard who looked too strange, so he decided to leave.

But Timidella followed him by herself and soon they married in his castle. They were happy together and Bluebeard almost forgot his dark secrets. He even got a son. Unfortunately, the son of the killed giant started looking for Bluebeard and his wife. He wanted to catch them both and eat them. This news had two consequences: Bluebeard went out to find the giant and kill him just like he killed his dad, and Timidella started panicking.

Believing the safest place in the castle was the forbidden tower, she entered with the key, given by Bluebeard as a sign of trust and found dead bodies of four wives. The key changed color and she ran out. Being in her room again she killed herself with a knife. Bluebear became a widower again, but this time he had to take care of his son too.

Boy was shy and sensitive like his mother, so Bluebeard decided to find a way to make him stronger and more self-confident. For this reason, he contacted a wise woman from the neighborhood, a widow known by her medical knowledge. 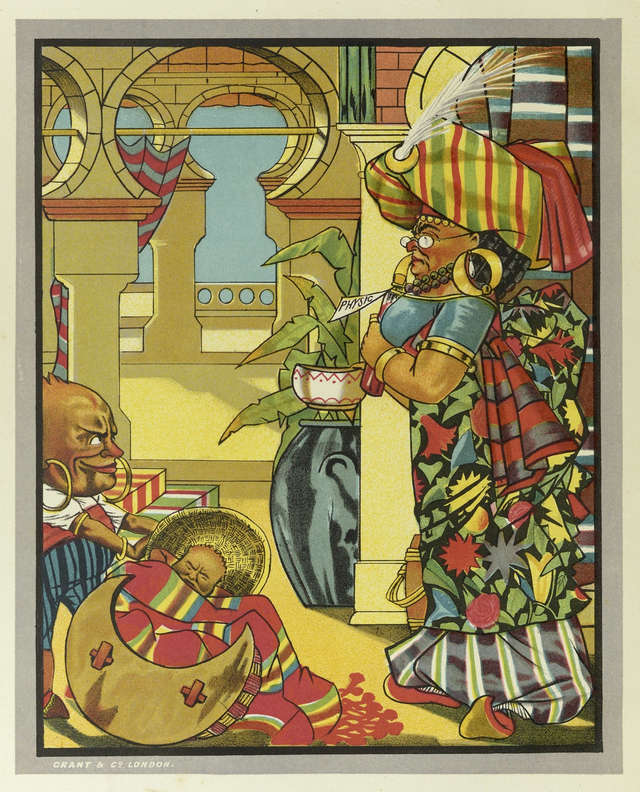 HUSWIFINA: The Widow readily consented to prescribe for the Baron's sickly Son

Huswifina readily accepted the mission of improving Bluebeard's son. She moved to the castle and started commanding the servants who had to renovate almost every corner. There he got her a laboratory next to his son's room. She started giving him more and more inedible potions. The dwarf, who stayed in the castle after Timidella's death, hated her but Bluebeard was impressed by her efforts and soon he took her for his sixth wife.

Not long after this, son died and Huswifina focused on Bluebeard's health instead. Her other favorite pastime was cleaning the castle. When Bluebear went on a bit longer travel, the dwarf took advantage and, knowing ho dangerous would be for Huswifina entering the tower, started convincing her to clean that place as well. But she kept her word and didn't want to enter the place, forbidden by her husband.

Dwarf, however, decided to enter himself, just checking if his dear Timidella's body ended with other wives. Huswifina noticed the missing key and followed the dwarf. When she approached the door of the forbidden chamber, he pushed her in and locked the door after her. In the night he returned and found Huswifina dead. When Bluebeard returned, he told him that Huswifina couldn't resist her curiosity, entered the tower, where, he, the dwarf and his faithful servant struck her to death.

Bluebeard felt kinda relief. On his trip, he met a poor family with two lovely daughters and several sons who all became soldiers. He decided he should marry the elder of the daughters - Fatima.

How Fatima became Bluebeard's wife and how her curiosity eventually led to Bluebeard's death, is an already well-known story. To refresh the memory and maybe learn a bit about its strong symbolism and historical background you can check here:

If you enjoyed the story about Bluebeard's six wives, share it with your friends!